One of the questions we often get asked at ABC Bullion is whether or not gold is ‘cheap’ or ‘expensive’. As gold does not produce cash-flows, this is not a straightforward question, as there is no traditional valuation model that one can use when assessing how expensive gold is.

But there are a number of metrics one can look at when trying to work out whether or not gold is cheap or expensive. One of those metrics is simply looking at the value of above ground gold, and dividing its value by the value of other financial assets. These financial assets include things like shares, government bonds and bank accounts, which are the types of assets that make up a large part of superannuation funds for example.

Starting with gold, and if we look at just the gold that is held in jewellery, bar and coin form, then we come to a total of 150,800 tonnes. Based on a spot price of USD $1200 per ounce, the total value of this gold is some USD $5.87 Trillion.

That sounds like a lot of money, and when you think the gold price has risen from sub USD $300oz to well over USD $1,00oz in the past 15 years, it would be tempting to think gold is expensive.

But the reality is that the nearly USD $6 Trillion the world’s gold is worth pales in comparison to the well over USD $250 Trillion that represents the current value of all the stock and bond markets around the world combined. Thought of that way, gold doesn’t sound so expensive after all.

Indeed, at just 3% of total US financial assets, one could gold is very cheap today, as at various points in the past (the early 1930’s and 1980s being examples) gold has made up closer to 20% of the value of financial assets, as the chart below makes clear. 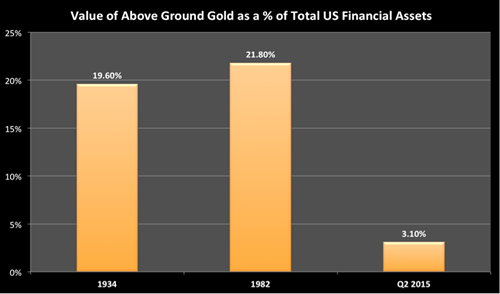 To be fair, the above chart doesn’t prove gold is cheap, and there is no guarantee prices won’t decline in the coming years. But metric like these, and comparisons with the not too distant past, As well as other metrics we can use to measure the value of gold, certainly should give those we believe gold is expensive today, and that prices are certain to fall in the coming years.

After all, history may not repeat, but it certainly does rhyme. The above chart would suggest gold prices could go a lot higher in the coming years.