The following article was published by Cameron Alexander, You can view the full article here

Australia as the second-largest gold producing market globally has two LBMA accredited precious metals refiners. The Perth Mint in Western Australia and ABC Refinery on the eastern seaboard based in Sydney. The former, state government-owned, has a long history dating back to 1899 and up until recent years has refined the lion’s share of precious metal from across the Australasian region. ABC Refinery meanwhile has been quietly expanding capacity and introducing new technology, picking up significant market share, and looks set to be a dominant force in both the domestic and international markets.

ABC Refinery is the refining division of the Pallion Group, Australasia’s largest independent precious metal services group of companies that have been involved in the industry since 1951. They are LBMA, NATA, and responsible jewellery council (RJC) accredited and have been accepted as a trading partner on the Shanghai Gold Change (SGE). The privately held group of companies offers a fully integrated complete mine to market approach that is rapidly gaining market attention on the world stage through market-leading technology and by building strong relationships across the industry.

While The Perth Mint claims on their website to refine more than 92% of Australia’s gold production, together with gold sourced from countries within the Asia‐Pacific region, this looks to be somewhat optimistic with ABC Refinery picking up several large contracts with various mining houses across the country in the last year, in turn boosting their market share to somewhere between 21‐23% of the gold total market. While in previous years the material being sent to refineries was largely geographically split, with a portion of the gold being mined on the east coast of Australia sent to ABC Refinery and The Perth Mint accounting for the bulk of Western Australian production, things have shifted this year with ABC Refinery picking up new mine sites from what was the Perth Mint heartland.

Looking to silver, ABC Refinery is now the market leader in the country, having poached a few substantial clients that were previously sending their material to Perth. ABC Refinery now refines around 70% of the available metal in the country and has just completed a significant expansion of its silver refining capacity.

The relatively young and passionate ABC Refinery executive team has invested heavily in people and technology in a move that will bolster their ability to compete with not just their Western Australian counterparts, but also refineries based in Asia and indeed Europe. The Pallion team has the ability to consume and value add metal through their mine to market approach (as does the Perth Mint to some extent) via their own range of bullion products (ABC Bullion), jewellery, industrial products, vaulting services, and trading facilities.

While still a relatively new player in what has for decades been dominated by a handful of global refiners, ABC Refinery is rapidly establishing itself as an internationally recognised brand. Precious metal refining itself is a difficult industry. Margins are often very thin, and they are often at the behest of market conditions in regard to supply and the ability to sell value-added material. When demand is weak, as it was for much of this year in parts of the world, it can be difficult to find a market for the refined metal. Those refiners that survive and indeed thrive in these challenging conditions are those that diversify and have several strings to their bows; be it investment products, scrap gold collection or offering value-added products such as coins or jewellery. This is a significant advantage of ABC Refinery and the broader Pallion group of companies that supply not only the international bullion investment market but also some of the world’s leading jewellery brands. 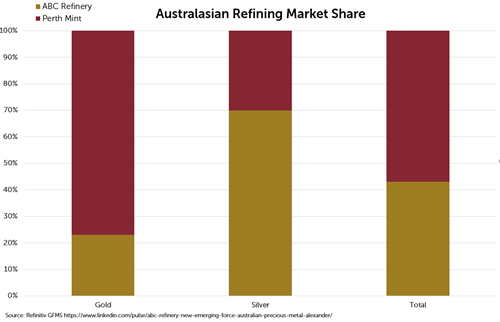 The full article can be found on Refinitiv Eikon here